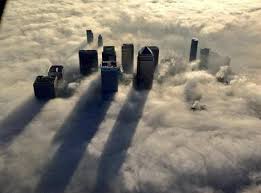 Brexit and the City: don’t let a good crisis go to waste

Instead of focusing on trying to preserve their existing business in the wake of Brexit, banks and asset managers should focus on how they can reinvent it.

Even a mushroom cloud has a silver lining. In the coming months and years banks and asset management firms will spend many millions of pounds on lawyers and consultants – and countless man hours – on restructuring and drawing up contingency plans to adapt to the harsh reality of Brexit.

But while it is prudent for them to make sensible plans for the disruption ahead, they should make sure they don’t allow a good crisis to go to waste. The danger is that they rush headlong into rebuilding a house that has burned down, without thinking about why it burned down in the first place or how it could be better designed to make it more resilient in future.

There are at least two ways in which the industry could make the best of a bad hand. First, by addressing why the City and financial services are held is such low regard by the wider public that the industry’s broad support for staying in the EU was an active factor in the vote to Leave. And second, by using Brexit as an opportunity to fundamentally rethink a business model that is working far better for people who work in the industry than for many of their customers or shareholders.

The fallout from Brexit

Let’s get the debate about the potential impact of Brexit on the City out of the way first. Whichever way you voted and whatever variation of Brexit eventually emerges – hard, soft, clean, smooth, or car crash –it is almost inevitable that firms based in the UK will relocate just as much of their business and jobs as they need to in order to retain the same sort of access that they currently enjoy to markets and clients in the EU.

Talk of hundreds of thousands of losses, an exodus from the City, or of Paris suddenly displacing London as a financial centre, is wide of the mark, but Brexit will be an expensive if not insurmountable distraction.

A far bigger challenge for the industry is the urgent need to work out why it has fallen into such disrepute, and to think how to make a better case for the value and purpose of what it does that is reflected in the way it does it.

To most people in the industry, the value of banking and finance is self-evident. But that rosy view of how financial markets help companies manage their risk and raise capital for investment and growth, or how they help individuals save for their future retirement, doesn’t play very well outside of the City, Canary Wharf or Mayfair.

The disconnect with society

Instead, most people see an industry that has been far more insulated from the fallout from the crisis than many of its customers; where there is frequently a disconnect between pay and performance; where fees are often opaque and confusing; where incentives are often not as aligned with customers as firms’ stated commitment to clients suggests they could be; and which has fought every regulatory reform since the financial crisis as though it were Custer’s Last Stand.

In short, there is widespread anger at an industry that is seen as disconnected from the society and individuals it exists to serve. This anger shapes the framework in which politicians set new rules and regulations, and nearly a decade on from the financial crisis there are no signs that it is going to blow over anytime soon.

So instead of focusing on the important value that it provides in terms of employment, tax receipts and its contribution to GDP, the industry should go back to basics and think about its underlying purpose. What is the concrete impact that banking and asset management has on its customers and on the lives of the individuals who provide the vast amount of money through their pensions, savings and insurance policies that is put to work in the financial markets? How could fees and incentives be better aligned with the interests of customers and particularly individual end users? How could the industry demonstrate that it has its customers’ interests at heart? In other words, how could the industry make a better case for the value of what it does? And how could it do it better? Banks are unlikely ever to be loved but it is in no-one’s interests that they continue to be bashed.

At the same time, the industry could use Brexit as an occasion to rethink its entire business model. Despite perpetual restructuring since the crisis, the business model for most investment banks – the high priests of market capitalism – doesn’t work anymore, thanks mainly to regulatory reform. Revenues have fallen by around 30% since 2010, but costs have only dropped by around half that, which means profits have plunged. While average pay has fallen by around a quarter since the crisis, it still accounts for more than half of all costs and investment banks still pay eye-watering bonuses for ‘performance’, which translates as sector-wide returns that are lower than its cost of capital. This means that most investment banks have been destroying shareholder value every year for nearly a decade.

Many investment banks continue to cling on to unprofitable businesses in the hope that things will improve. Despite unimaginable advances in IT and communications, they continue to employ tens of thousands of highly-paid support staff in shiny offices in the heart of one of the most expensive cities in the world, and they duplicate billions of pounds on building their own IT systems that do the same thing as their arch rival across the road. Instead of focusing on how to preserve their existing business in the wake of Brexit, it’s perhaps time to think about how they could reinvent it.

For asset managers, the problem is the other way round: they have sailed through the post-crisis storm like an ocean liner, with their fees, costs structures and profit margins virtually unruffled for the past decade. They have been so consistently profitable that they have caught the attention of regulators, and are likely to face far more political scrutiny in future. The challenge for them is in designing a business model that delivers a fair return while being more aligned with outcomes for customers, before regulators design it for them.

The majority of the industry is deeply unhappy with impending Brexit. Yet there is little they can do about it, and no doubt they will apply their ingenuity to minimise its impact. It would be in the long-term interests of the industry, its shareholders and its customers, if the industry applied the same energy and resourcefulness to the far bigger challenge of reconnecting with society and reinventing its business model to find a break in the clouds.