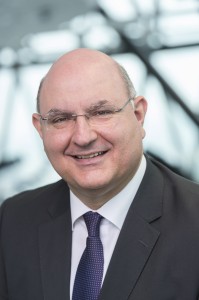 Unlocking pensions in the EU – dinner with Gabriel Bernardino, EIOPA

At this dinner  Gabriel Bernardino will discuss the challenge of developing a deeper pool of pensions assets in Europe, and in particular will focus on the recently launched PEPP initiative (pan-European personal pension products) that aims to encourage millions more people in the EU to invest in their pensions. For more information on PEPPs click here.

Gabriel Bernardino is the first Chairperson of EIOPA. He was elected by the Board of Supervisors of EIOPA in January 2011. His nomination followed a pre-selection of the European Commission and was confirmed by the European Parliament after a public hearing held in February 2011. Mr. Bernardino assumed his responsibilities in March 2011 for a first five-year term. In December 2015 the European Parliament confirmed the re-appointment of Mr Bernardino for a second five-year term, which started in March 2016.​

Prior to his current role, Mr. Bernardino was the Director General of the Directorate for Development and Institutional Relations at the Instituto de Seguros de Portugal (ISP). He has served in several positions of increasing responsibility since he joined the ISP in 1989 and represented EIOPA’s preceding organisation, CEIOPS, as Chairman between October 2009 and December 2010.