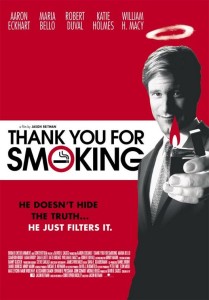 Thank you for smoking: the big tobacco approach to lobbying

This column was originally published in Financial News in 2013

In the movie Thank You For Smoking there is a great scene in which a slick lobbyist for big tobacco played by Aaron Eckhart teaches his son how to argue. You don’t have to prove that you’re right, he says. You just have to prove that the other guy is wrong. In the real world, his counterparts in the banking industry have taken this advice to heart in their intense and well-funded lobbying campaigns against regulatory reform over the past five years.

In few areas has this approach been as clear as in the banks’ response to the recent proposal in the US to resurrect a version of the Glass-Steagall Act of 1933. The two senators sponsoring the bill – Democrat Elizabeth Warren and Republican John McCain – say it is time to make banking boring again. They are perfectly happy for banks to take big risks on Wall Street, they just don’t want them doing so with federally-insured deposits.

The banks and their supporters have enthusiastically slammed the proposed legislation, arguing that it misunderstands the causes of the financial crisis, would have done little to prevent it, and would do nothing to avoid another crisis in future. This approach is disingenuous – but the drill is well-rehearsed: misrepresent, ignore, and avoid. Whether it is Glass-Steagall, bankers bonuses, proprietary trading or capital requirements, the effect is the same. That there is even still a debate over higher levels of capital and lower leverage is testament to the success of the diversionary tactics of the banking lobby over the past five years.

The campaign against Glass-Steagall is instructive. It deliberately misrepresents the proposed legislation, and wilfully ignores the impact that the repeal of Glass-Steagall in 1999 had on the financial system in the decade before the financial crisis, in an attempt to avoid a serious discussion of whether the biggest banks have become too big to manage and too complex to regulate.

Critics of the legislation almost sound like they are reading off a centrally-prepared script. They argue that the bill is a “misdiagnosis” of the financial crisis that paints a “flawed narrative” of the importance of Glass-Steagall in keeping banks safe for more than 60 years and “simply inaccurate” explanation of the crisis. The chief financial officer of JP Morgan Chase went so far as to say that “the crisis had nothing [nothing at all, you understand] to do with the repeal of Glass-Steagall”.

They argue that under Glass-Steagall Lehman Brothers and Bear Stearns would still have gone down, and point out that plenty of boring retail and commercial banks from Countrywide and Washington Mutual in the US to Dexia and Northern Rock in Europe, were perfectly capable of blowing themselves up without any help from the sort of racy activities that the new bill “arbitrarily” seeks to curb. Far from being inherently more risky, big banks turned out to be “big enough to cope” and provided “a port in the storm” during the crisis.

And besides, the bill would be an unwelcome distraction from all of the positive regulatory reform that is already underway, and would impose an unnecessary burden on a “fragile” economic recovery.

Some of these complaints are valid, and there is a debate to be had over the merits or otherwise of the proposed bill (I veer towards “otherwise”), but there are a number of problems with the banks’ approach.

First, it focuses on knocking down claims that the bill doesn’t actually make. At no point, for example, does the bill claim that the financial crisis would have been averted if only Glass-Steagall had not been repealed in 1999. It doesn’t pretend it will prevent banks of whatever persuasion going bust in future, and it states in black and white that it would not end the problem of “too big to fail”. Instead, its ambition is more modest. It seeks to “reduce risk in the financial system” (something even its critics accept it would achieve) and in doing so “decrease the likelihood of future financial crises”, and protect US taxpayers from footing the bill if and when a big universal bank runs into trouble with its investment banking or trading activities.

Second, and more important, is that critics of the proposed bill conveniently ignore the very real contribution that the repeal of Glass-Steagall made to the financial crisis. The unpicking of Glass-Steagall in 1998 and 1999 sent a powerful message to Wall Street and the banking industry that if they lobbied hard enough they could get pretty much any law they wanted overturned. They still seem to think that is the case, and part of the slightly confused look in their eyes today is that they don’t understand that things may have changed. Don’t forget that the repeal came in response to the merger of Citicorp and Travelers Group, which was technically illegal when it was announced in 1998.

As such, the repeal represented the triumph of deregulation that set the tone for the following decade. Lord Turner, the former chairman of the Financial Services Authority, summed up the crisis neatly as the “moral and philosophical failure of market deregulation”. The wave of deregulation and the mergers that followed encouraged the spread through the financial system of a more investment banking-style, market-driven culture of shorter-term targets, higher leverage – and much higher pay and bonuses. This culture infected sleepy mortgage banks and traditional commercial lenders, which developed increasingly racy business models that needed feeding with ever more exotic securities.