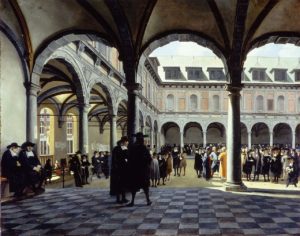 What is the point of stock exchanges?

June 2019 • The Purpose of Finance • by William Wright & Tracy Blackwell

This article was published in The Daily Telegraph in June to coincide with the launch of our recent report on ‘What are stock exchanges for? And why should we care?’

You can download a summary of the report here

Maybe it’s just that we’re getting older, but the questions on Mastermind seem to be getting easier. Until last week, when a pretty obscure question came up in the general knowledge round: “Which trading and financial institution has its headquarters at 10 Paternoster Square near St Paul’s Cathedral in the City of London?”

It was not immediately obvious why knowing that this is the address of the London Stock Exchange is an essential part of anyone’s general knowledge, but contender Allan, whose specialist subject was Leicester City Football Club, got it right.

Like most viewers of Mastermind, Allan probably doesn’t spend too much time thinking about the relevance of the London Stock Exchange to his daily existence. But the changes in the world of stock exchanges and stock markets over the past 20 years could have a profound effect on him, the wider economy and on society for decades to come.

Given the simmering anger with banking and finance since the financial crisis, it can be hard to make the case to politicians and the wider public that stock markets play a vital role in a healthy economy. At the most basic level, stock exchanges are in the business of capital formation: they help companies that are in need of capital raise money from investors who have it.

More than 1,700 UK companies are listed in London, they’re worth a combined £2.4 trillion, and in the past five years they’ve raised more than £125bn in capital to invest in their business, supporting growth, innovation and jobs.

They are the most powerful engines we have created for spreading the profits of wealth creation across society, allowing ordinary people as savers and investors to benefit from the innovations and entrepreneurialism to which they have contributed.

But a new paper, The Purpose of Stock Exchanges, published by the think tank New Financial as part of the Purpose of Finance series, warns that stock exchanges – and the vital role they play in raising capital, sharing risk, setting standards, improving accountability, and democratising wealth creation – are under threat.

While stock markets in the UK and US are bigger, deeper and more efficient than ever before, something is wrong. Many of the biggest growth companies have chosen to stay private for longer, and to raise money on stock exchanges when they are more mature – if they ever list on them at all. The number of listed companies has nearly halved over the past 20 years on both sides of the Atlantic; the number of new issues has dropped by three quarters; and the amount of capital being raised is down by around two thirds. At this rate, at some point in the next 50 years there won’t be enough listed companies in the UK to fill the FTSE 100.

The irony is that with 10m people effectively becoming investors for the first time under auto enrolment, we have a massive opportunity to strengthen their connection with capitalism and prevent a future pensions crisis.

Unfortunately, current trends suggest there will be fewer public companies to invest in.

There are a lot of different factors at play. The rapid growth over the past few decades of alternative sources of capital, such as venture capital, private equity or the bond market, means that companies have less need to raise money on stock exchanges. The increased burden of disclosure and public scrutiny of listed companies makes the stock market a less attractive place to be. And changes in the finance industry have brought complexity and structural misalignments that have helped to undermine the underlying purpose of stock exchanges.

This decline has an impact far beyond the arcane world of stock exchanges. Stock exchanges play a critical role in helping to finance growth and investment by providing long-term risk capital to companies. The capital that they help raise drives innovation, improvements in productivity and long-term economic growth. They improve standards and levels of transparency and accountability in business. And crucially, stock markets help democratise wealth creation by enabling millions of people to share in the growth of successful companies.

At a time when levels of public trust in business are already low and amid the debate on the crisis of capitalism, millions of individuals are being asked to carry more of the responsibility for their future pensions through initiatives such as auto enrolment in the UK. A growing section of the economy – perhaps the most dynamic part – is effectively off-limits to them. This sense of exclusion could heighten concerns over inequality and raise questions over the social licence to operate that is fundamental to sustainable capitalism.

There is no simple solution. Stock exchanges and investors cannot simply rewind the clock and hope for the best. It will require a concerted and collective response from exchanges, companies, banks, investors, regulators and government.