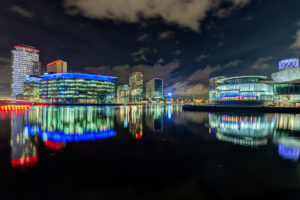 Report: the impact of capital markets on people’s everyday lives

This unique report analyses the impact of capital markets on people’s everyday lives through the lens of the economy in the North West of England. The report shows what goes on in the City of London is far more relevant to the everyday lives of millions of people living in the region than most people in the City or the North West would expect – and we hope that it encourages the industry to think differently about its role and impact.

New Financial is a social enterprise that relies on support from the industry to support its work. To purchase a copy of the report, please use the order button at the end of this page.

Capital markets play a vital role in channeling investment into the economy to help drive growth and prosperity. But to most people outside of the industry, what happens in the City of London and in the financial markets seems complex, confusing and remote. The further from London you go, the less relevant capital markets seem to the day-to-day functioning of the local economy and to people’s everyday lives. And this sense of separation has not been helped by the economic fallout in the decade since the financial crisis and the high-profile scandals in the industry.

This report analyses that relevance and addresses one of the fundamental questions facing the banking and finance industry today: why should MPs, policymakers and individuals around the country care about the capital markets?

We chose the North West as our focus because it is a good example of the ‘real’ economy in the UK: it is a clearly defined region, it’s a long way from the City, it has a thriving regional economy in its own right across a wide range of business sectors, and levels of income and wealth are more representative of the rest of the UK than London or the South East. While the report is focused on the North West, ultimately it’s about the relationship between the banking and finance industry and the rest of society, and how the industry can make a better case for what it does in concrete terms that people around the country can relate to. The methodology could be applied to any region of the UK – or indeed any other country.

We think it’s the first time that anyone has tried to measure the impact of the banking and finance sector on a regional basis in terms of the industry’s customers:

* How many people in the region have how much money invested in their pensions?

* How many companies that are based in (or have significant operations in) the region have used the equity, bond or loan markets to raise capital and how much have they raised?

* How many companies in the region have been backed by private equity, venture capital, or have been involved in M&A?

* And – crucially – how many people do these companies employ in the region?

This has been a huge research project for New Financial – it has been more than a year in the making – and we are very grateful to Barclays for supporting this research.

1) A direct contribution: while capital markets and the City of London may seem remote from the day-to-day functioning of the local economy to many people in the North West of England, they play a vital role in supporting the economy in the region and have a direct impact on people’s everyday lives.

3) An important financial centre: the most immediate contribution of banking and finance to the North West is that the sector employs more than 100,000 people in the region, making it the largest financial centre in the UK outside of London and the South East.

4) Providing pensions: the most direct link with the capital markets for most people in the region is through their pension. Around 2.1 million people in the private sector contribute to a workplace pension and a further 300,000 public sector employees are part of a funded defined benefit pension scheme. The combined pensions assets of people living and working in the North West add up to nearly £200bn. The majority of this money is invested in capital markets on their behalf by hundreds of asset management firms. 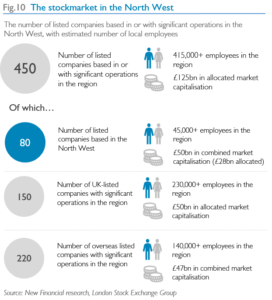 6) Raising capital: more than 100 companies based in the North West have raised more than £35bn in the equity, corporate bond and syndicated loan markets over the past five years. When you factor in UK and overseas companies with big operations in the region, we estimate that nearly £70bn in funding from the capital markets is being put to work in the local economy.

7) Investing in growth: more than 1,100 high-growth companies in the North West have received £2bn in investment over the past five years from venture capital, crowdfunding, business angels, development funds, specialist lenders and bank finance.

10) Day-to-day business: capital markets play an important role behind the scenes in the regional economy, in supporting day-to-day activities such as consumer credit, bank lending and insurance. Banks provide more than £80bn of mortgages in the region, nearly £10bn in lending to SMEs, and individuals in the North West pay nearly £10bn in annual insurance premiums.

The report analyses the impact of capital markets on the economy of the North West of England across the following sectors: pensions and asset management, stockmarkets and equity capital markets, bank lending, corporate bonds, syndicated loans, M&A activity, private equity, venture capital and growth investment, and investment in infrastructure.

For example, there are 80 listed-companies based in the North West with a combined market capitalisation of just over £50bn (this represents 4% of all UK-listed companies and 2% of their combined value).  However, there are an additional 370 listed companies from the UK and overseas with significant operations in the region. We estimate that between them, these 450 companies employ more than 415,000 people in the North West, and when you allocate their market value in proportion to their workforce in the region they have a combined market value of more than £125bn.

I would like to thank Dealogic, Beauhurst, and Preqin for providing much of the data in this report; Christian Benson and Eivind Friis Hamre for doing the heavy-lifting on the research; Barclays for supporting this important project; and our members for supporting our work. This report is a work in progress, and we would welcome feedback on our approach and conclusions: to email us about the report, click here. We apologise for any errors, which are entirely our fault.

The full report The Impact of Capital Markets on People’s Everyday Lives includes the following:

1) A summary of the main findings of the research

2) A foreword by Jes Staley, Group Chief Executive of Barclays, and comments from John Glen MP, Economic Secretary to the Treasury.

4) A summary of the main functions of the capital markets

5) 10 key examples of how different firms in the region use the capital markets to support their day-to-day business and growth.

9) An aggregate of the underlying role that capital markets play in supporting the economy in the North West across 12 sectors of activity and how many people are employed in the region by companies using the capital markets.

10) A case study on how BAE Systems, one of the largest employers in the region, uses the capital markets

11) Analsyis of employment in banking and finance in the region